What are you looking for?

The Latin American Jewish educator in a transnational world (Report) 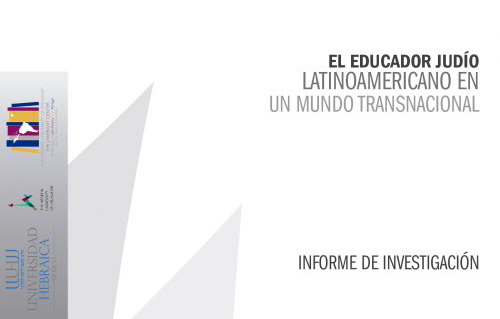 PRESENTATION OF THE INTERNATIONAL RESEARCH REPORT (2011-2014) A novel look at the diversity and richness of our educational systems. This study constitutes an x-ray of the socio-demographic characteristics, of the institutional affiliation, practices and visions of 1,379 Jewish educators from Mexico and Argentina, through their voices. Prof. Sergio DellaPergola – Hebrew University of Jerusalem Born in Italy, he has lived in Israel since 1966. He has a doctorate from the Hebrew University of Jerusalem, is Professor Emeritus Shlomo Argov of Relations between Israel and the Diaspora at the Institute of Contemporary Judaism Avraham Hartman from the Hebrew University, and former Director of the Institute. Renowned international specialist in the demography of world Judaism, he has published numerous books (including Israele and Palestine: La forza dei numeri: Il conflitto mediorientale fra demografia e politica, 2007, and Jewish Demographic Policies: Population trends and options in Israel and the Diaspora , 2011) and more than two hundred articles on historical demography, the family, international migration, Jewish identification, and population projections in the Diaspora and in Israel. He has lectured at more than 60 universities and research centers worldwide, including: Brown, UCLA, Illinois in Chicago, Brandeis, Columbia, National University of Buenos Aires, USP in San Pablo, UNAM, El Colegio de Mexico e Iberoamericana in Mexico City, Oxford, SOAS in London, Paris V and INED in Paris, Pavia, Milan, Rome, Florence, The European University Institute, Moscow, and Cape Town. He acted as Senior Policy Consultant for the President of Israel, the Israeli Government, the Jerusalem Municipality, and many important organizations both nationally and internationally. In 1999 he won the Marshall Sklare Award from the Association for the Scientific and Social Study of Judaism, for distinguished achievements. Prof. Judit Bokser Liwerant – Autonomous University of Mexico and Hebrew University of Jerusalem Researcher and teacher, specialist in political theory and globalization processes, born in Argentina in 1946 and settled in Mexico since 1967. Her academic and research work has been related to study of the contemporary reality of the social sciences as well as the dominant tendencies of those disciplines. He studied political science at the Hebrew University of Jerusalem, having completed a doctorate in the same specialty at the National Autonomous University of Mexico (UNAM). She has been the head of the Division of Postgraduate Studies at the Faculty of Political Sciences of the same Mexican university and is a full member of the Mexican Academy of Sciences. She is coordinator of the Graduate Program in Political and Social Sciences at UNAM and also director of the Mexican Journal of Political and Social Sciences, as well as a member of the National System of Researchers, level III. His theoretical proposal refers to a pluralism ‘of an integrative and universal nature that starts from the inherent value of diversity, in which differences must be negotiated by mechanisms that reinforce civility and democracy … ‘. He is a member of the Mexican Academy of Sciences. The research combined the efforts of the Liwerant Center for the study of Latin America and its Jewish communities, the Hebrew University of Jerusalem, the Hebraic University and the Vaad Hajinuj of Mexico, the AMIA and the Vaad Hajinuj of Argentina and the Pincus Fund for the Jewish Education of the Diaspora, Israel.